For the Love of Purple
Purple-ized Story Videos, Anyone?

Grapielocks and the Three Purple Bears 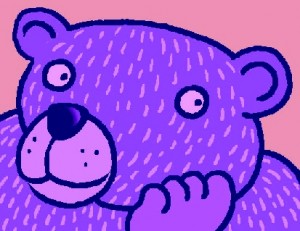 Well, Grapielocks woke up from dreaming about lilacs to find the three purple bears standing over her angry about the unpurple–icious nature of plumbody being in their grape home!  She ran out the purple door as fast as her amethyst shoes could carry her without even so much as a thank you!

The moral of this grape story is that you should never leave your purple door unlocked or you just might have an encounter of the very ungrapeful kind!