For the Love of Purple
Purple Recipes

It’s time again for Purple Recipes!!  This week I tried out Purple Pancakes!

Mix up pancake mix according to directions.  Add food coloring and cook as directed.

Now, the box of food coloring says to add one part red for every two parts blue when making violet.  However, the yellow of the pancake mix made it start off a bit too yellow so I had to adjust.  I initially added two drops of red and four drops of blue but it made it too blue.  So I added two more reds and then another two more drops of red and then it seemed a bit too red so I added two more drops of blue and it came out a very nice shade of darker lavender.  See? 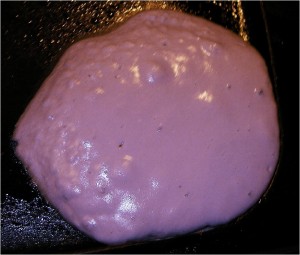 When it’s done cooking in the pan, it does brown so the finished product is less purple but still had the purple around the edges.

blue food coloringpancakespurplepurple reciperecipered food coloring
Do you have a purple project idea?
The Story of Plumeria, The Princess of Purple