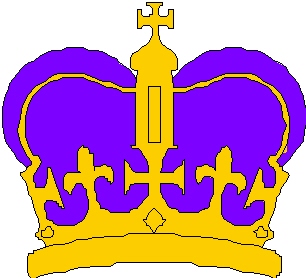 Once upon a time there lived a cruel Emperor who hated purple.  He decreed that anyone found wearing the grape color would be beaten until he was black and blue.  For many years, nobody dared to defy the Emperor for fear of the law, until one day a small child reminded the Emperor that anyone beaten until black and blue would eventually turn purple until fully healed.  Not to be outdone, the Emperor immediately had the documents drawn up replacing the punishment with beheading.

Many years passed and the Emperor was bored.  He longed for a change when he suddenly had a plum of an idea!  He sent for the finest tailor in all the land to make him a suit of clothes befitting a man of his grape importance.  As luck would have it, the finest tailor in all the land’s name was Amethyst.  She was, indeed a talented and most crafty soul.

The Emperor was quite taken with her and vowed to give her anything she desired in order for her to make him the most beautiful suit of clothes ever worn by an Emperor.  Amethyst worked day and night spinning threads and sewing cloths until one day the Emperor’s grapest suit of clothes was ready.

The Emperor was a man who loved surprises and so he was exceedingly pleased when Amethyst asked him to dress with his eyes closed until the unveiling.  With breathless anticipation, the Emperor carefully dressed and presented himself to his court in front of Amethyst and all the royal guards.

Amethyst asked the Emperor to step in front of the partition to present himself. As the guards es courted the Emperor, eyes closed tightly, into view, there were gasps from all those in attendance.  No one quite knew what to say, but Amethyst did.  She oohed and aahed loudly and declared she had never seen such a handsome and distinguished man in all her days.  She added that he was really PLUMthing special.  The attendees saw no alternative but to follow Amethyst’s grape lead and began to ooh and ahh along with her.

Finally Amethyst told the Emperor to open his eyes and look into the large, ornate and golden mirror place in front of him.  He was so grapely influenced by the grape compliments he had been receiving all the way down the aisle that when he saw is own reflection, he was blinded by pride.  He felt incredibly powerful and almost dazzling.  He was so grapeful to Amethyst for this was the first time anyone had ever made such a grape fuss over his appearance that he instantly fell in love with her.

Amethyst and the Emperor were married at once and the law against purple was revoked.  In its place was a new law which stated that purple was now the official color of the kingdom and, as such, his subjects were expected to own a suit of purple clothes of their own.  The palace was painted a lovely shade of lavender and the royal gardener’s planted eggplant all along the mote.

Amethyst and the Emperor soon had a daughter they named Violet.  And they lived a long and grape life together.