For the Love of Purple
The Purple Project

Ok Purple People!  I have learned a grape lesson this week.  You want to know what it is?  It’s going to positively change your crafting life!  You ready?  Brace yourselves…

TIL YOUR HAND FALLS OFF!

Yes, I have another not-so-perfect, but not entirely awful Purple Project to report.  My dad had some old tshirts that turned a rather yellow color.  So my mom gave them to me to “work with.”  It was actually more yellow than the picture shows.

So I decided to dye it purple.  I twirled it a bit so some of the areas wouldn’t take too much dye.  About half of it was much lighter.  So far so good, right?  I decided to use the Clorox Bleach Pen to create little bunches of grapes on the right side of the tshirt.  Unfortunately, the bottom of the Clorox Bleach Pen was mostly runny.  Apparently just simply shaking the bleach pen isn’t good enough.  You gotta shake your bleach pen like you’re trying to loose your hand from your arm!  And probably turn purple in the process so I guess it’s not a total loss!  ;D

Runny bleach pen means my bunches of grapes looked more like leaves without the veins.

I didn’t want to disappoint and I did have a number of the shirts.  Not having as much time to devote to the dying, I just left it in for a short while and made it all basically one color.  I decided to take a slightly different tactic.  Actually my son suggested it.  Thanks Chris!  So… I made the grapes smaller and further apart.  The bleach still ran so the grapes aren’t as perfect as I’d like but it did look much better. 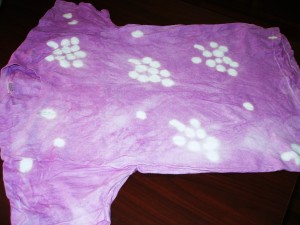 After hours of dying and bleaching and rinsing and drying, I ran out of time to do another.  You get the idea.  It would really be kind of cute if the bleach pen was more gel like as when it was new.  Remember, my sweet little purple berries, I make the mistakes so you don’t have to!

Next week, I have a new idea to do with these shirts.  It involves a bit more work, but I think you’ll like it!

berriesClorox Bleach Pen CraftcraftgrapegrapespurpleThe Purple Projecttshirttshirts
Ever been a lost purple flower in a field of yellow?
What purple videos would you like to see?