For the Love of Purple
Purple Product Reviews

Update on a Purple Product Review 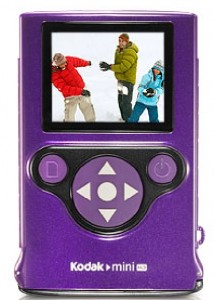 Several weeks ago, I reported on my most purple–ious new Kodak Mini HD Video Camera. Well, I’m sad to say it’s away at the Kodak doctor’s office.  While the experience of its ungrapely breakdown was both humorous and unfortunate, the story of Kodak’s customer service gets two purple thumbs up!

The first part of the story is PLUMthing I just never expected.  I had taken some pictures and plugged the camera into my computer in order to download a purple product for review when I looked up and found my computer screen in a most ungrapely way.  It was WHITE….BLANK!  I immediately unplugged the camera and had to do a hard shut down of my computer.  When I was certain Zippy was okay, I noticed that the camera was PLUMhow unwilling to shut off and was getting hot very quickly.  Pushing the off button only shut it down until I lifted my sizzling fingers off the off button.  Just MAUVElous!

This had happened once before when I tried to download some pictures.  It didn’t affect my computer then, nor did it heat up quite so quickly.  I remember that we had taken the memory card out of it and it PLUMhow reset itself so I tried that.  Not only didn’t it shut the camera down, but it was beginning to heat up to where my fingers were so red they were almost purple and there was a glowing white half circle coming from the upper right heated area spreading across at a rapid pace.

I decided to contact Kodak Customer Support so I went on their website and found their chat feature.  At first, the Kodak representative thought I had meant that the camera wouldn’t turn ON.  When I corrected him and conveyed that it was quickly heating up to the point where I could no longer hold the camera in my hands, he sprang into action to help me.  He immediately stated that this was a very rare problem and in the interest of grape customer service, Kodak would pay for me to ship it back to them in order to be repaired or replaced.  How do you like that?  No arguing.  No trying to tell me it was my fault.  No muss, no fuss!

The first thing he asked me was if my computer was okay and if I needed medical attention after my almost purple fingers’ encounter of the VERY HOT KIND.  I was shocked, yet very grapeful, that he would inquire.  I told him my computer was fine and that my fingers, while a bit more grape than I’d like, were just fine as well.  The glow continued to grow on the screen when the camera miraculously turned itself off.

Almost immediately, the camera began to cool off as the representative gave me the information I needed in order to mail it back to them.  He apologized for the problem and for not being able to help me any further and asked me if there was anything else I needed.  While I was a bit nervous as it happened and am not tickled purple to have to send it in for repair, I am grapeful that PLUMbody at Kodak was so attentive, kind and courteous and did everything in his power to help me that PLUMhow, I came away from the experience thinking even more highly of Kodak than I did going in.

cameracustomer serviceHDkodakminipurple
Why don’t countries have purple flags?
Keeper of the Purple Twilight